It Started With Cool Hair Ties

“Check out this company, they make hair ties for guys.” Like many of you, the first time I heard of The Longhairs, my homie Sean (you might know him as Elefante) used a similar phrase. I had no idea my friend’s simple recommendation would put me on a path to getting hired at The Longhairs.

I was fresh into my long hair journey and hadn’t fully realized the effect it would have on my identity. I put the recommendation in the back of my mind and left it there for a while.

About two years later, my hair finally passed my shoulders and I just about had enough of the same “toxic ties” most guys start out with—the stretching, the snapping, the ripping, the tangling. Not to mention my wife was sick of sharing hers with me. Recalling Elefante’s teachings, I sought out these “Hair Ties for Guys.” 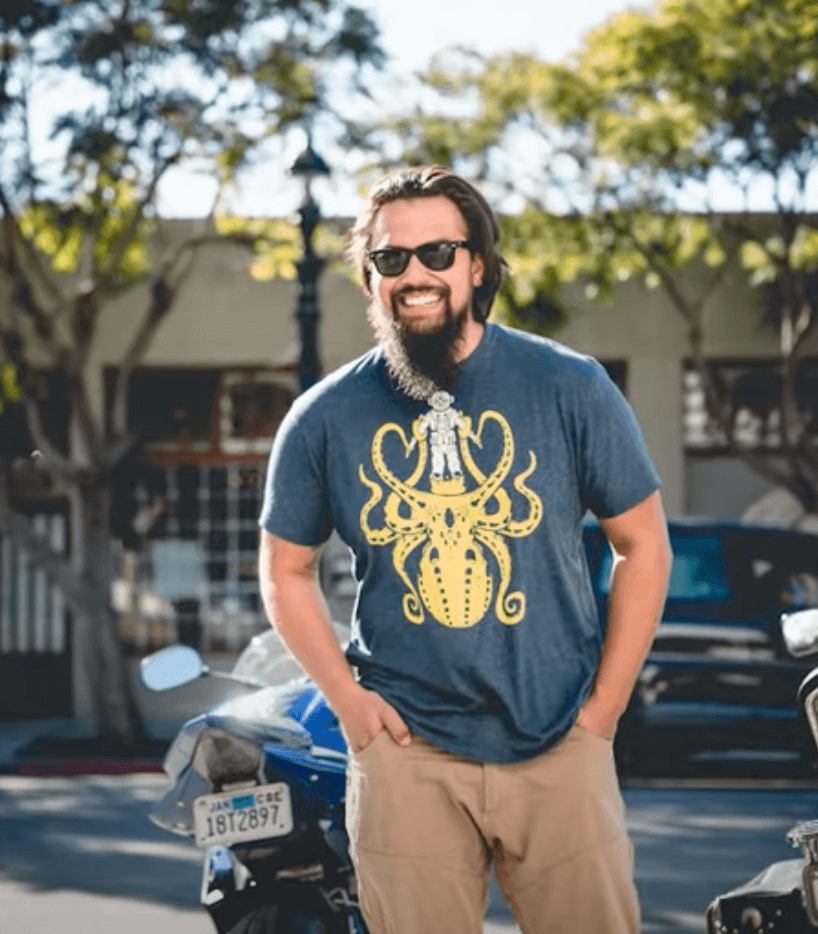 I Decided To Look Them Up

I didn’t know what to expect but I was confident I would find something I liked. I had no idea there would be a community of guys like me. I was pumped on my first order, ending up with The Vikings and The Kaleidoscopes.

The Longhairs seemed chill, and they nailed all of the issues I was having with my toxic ties. Seeing their success with The Great Cut was also inspiring. I figured a group of guys that can set a world record for donating hair to Children With Hair Loss definitely deserves my business.

After following the crew for a time on Instagram, I was becoming a true believer.

Watching these long-haired bros bring entertainment and education to the longhairs of the world, and clearly having a great time in the process, gave me serious FOMO.

Being a San Diego resident, I needed to meet these guys. I wasn’t expecting to get hired at The Longhairs, I just wanted to get to know these wild hair-whipping bros. Elefante was working with them at the time, so I asked if he would put me in touch (probably more of a demand than a request, sorry Sean). 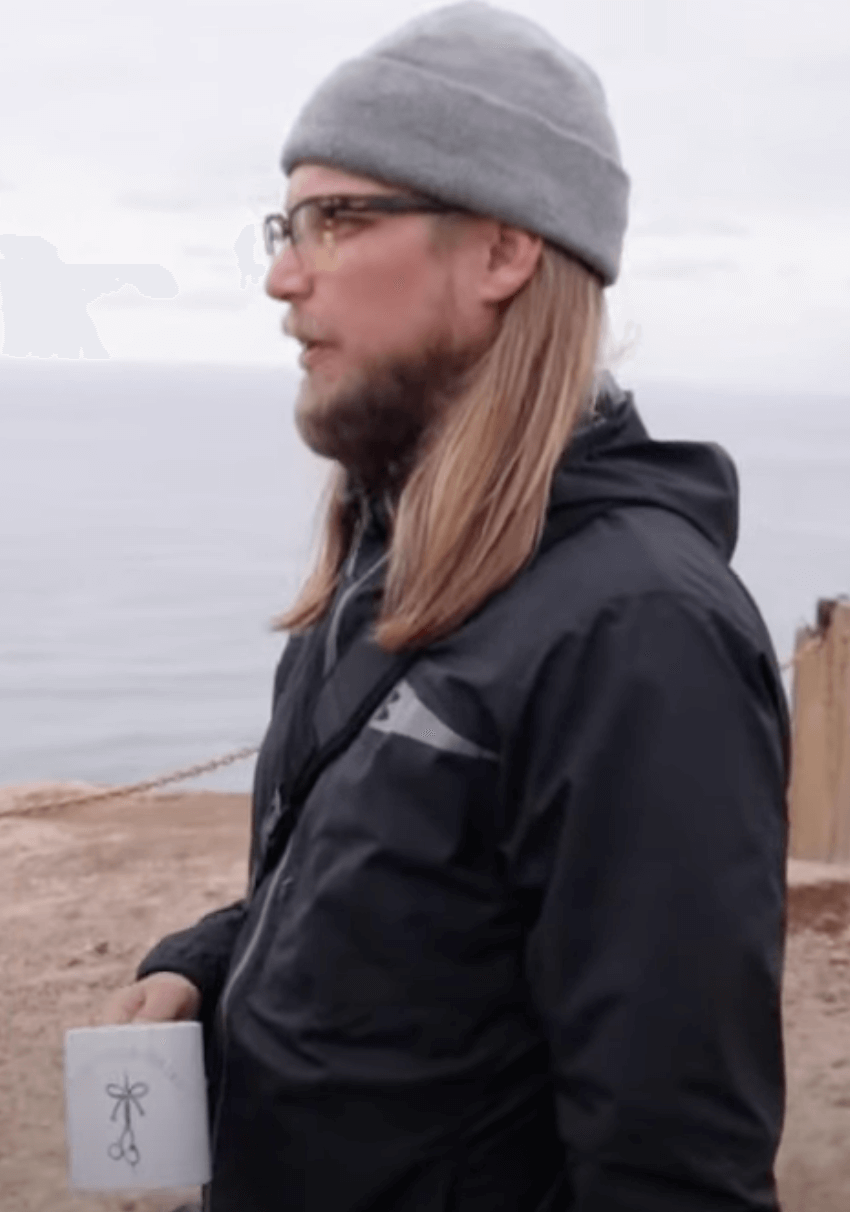 The Day We Met In Person

Some weeks later, Elefante asked if I was interested in being hired by The Longhairs for a one-time photoshoot.

Apparently they were getting ready to release an islander-themed hair tie, and being Chamorro, I was the right man for the job. You can see I had an absolute blast in the video feature, Enjoying The Ride.

I met El Moreno, El Garvinski and El Spencerino for the first time. After seeing these guys online for so long, actually interacting with them reaffirmed this was a group I wanted to be a part of.

Spencerino and I became friends instantly. We stayed in touch after the shoot and the bromance was on.

After getting to know me better, he was convinced I needed to be a guest on Let It Ride, so I could share more about my life. El Spencerino hounded El Moreno and El Rubio until they finally agreed to make it happen.

I had a great time talking to the guys on the show and was able to share a lot of profound moments in my life, like getting shot at. 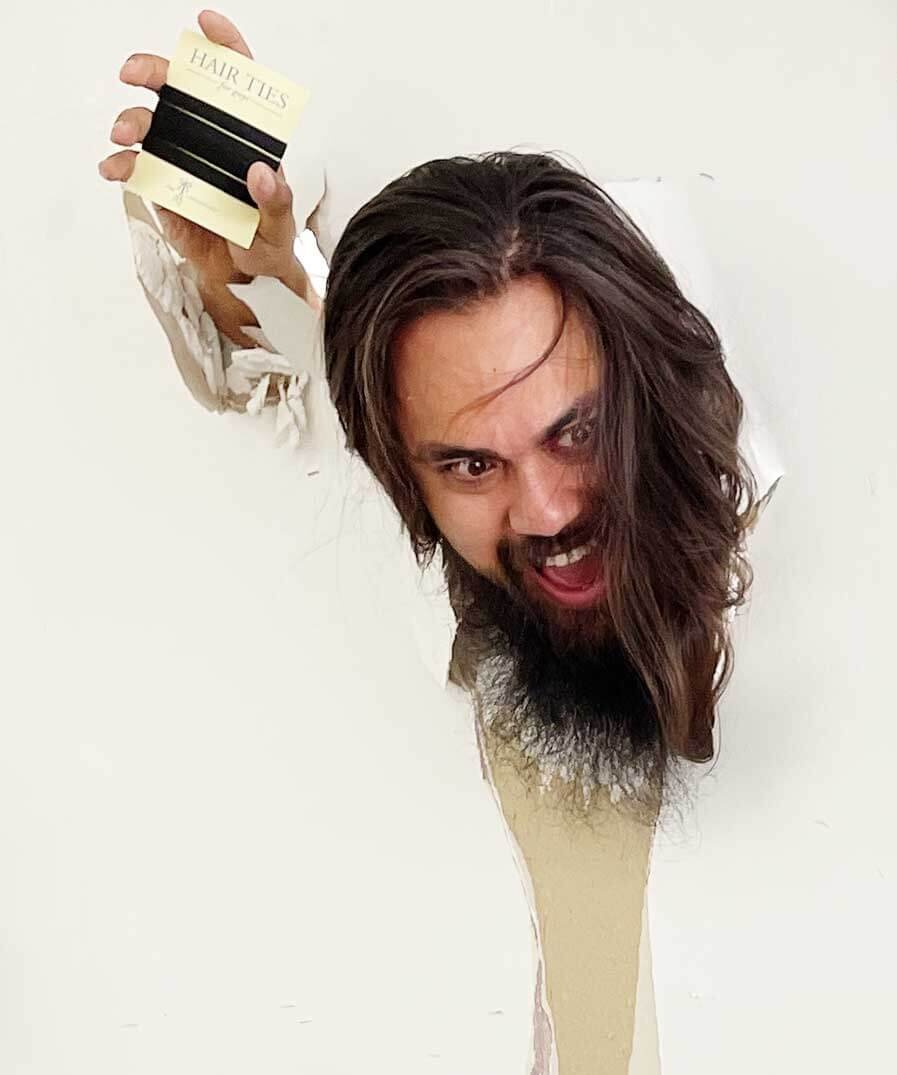 Forcing My Way In

A short time later the team was seeking volunteers to help them move a massive shipment they were expecting. I wanted to see my new friends again, so naturally I volunteered.

I showed up early and decided to help fulfill orders until the shipment arrived. Several hours into working at the warehouse, El Moreno announced the shipment wouldn't arrive until Wednesday. I decided to just finish the work day with them anyway.

On Wednesday I showed up early and helped with orders again. This time the shipment arrived as planned and our motley crew of long-haired bros proceeded to move nearly six pallets of product upstairs into our second-story warehouse.

No easy task folks, let me tell you.

To people that saw us moving the boxes, we probably looked like a bunch of hairy weirdos getting way too excited about moving five tons of shampoo and conditioner, but those that have joined our ranks understand it’s not just about having long hair.

The Longhairs is an idea. It’s a belief. It lives through us. It’s a congregation of people going against the grain and rejecting the standards put onto us. It’s an attempt to foster an inclusive space, encouraging men to be proud of their long hair.

I kept working at the warehouse, unpaid, but I didn’t care about the money. The thought of getting hired at The Longhairs still hadn’t crossed my mind. I was just happy to be there. I felt like I belonged with these guys.

All the jobs I’ve ever had were what some refer to as “shooter jobs.” I’ve always worked in austere environments, where your number can come up at any moment.

To some, packaging orders and shipping them to customers seems mundane and undesirable, but I thoroughly enjoyed myself. El Spencerino and I jammed to various, “well how about this band?” playlists and delivered epic hair ties to epic hair guys. What's not to like? 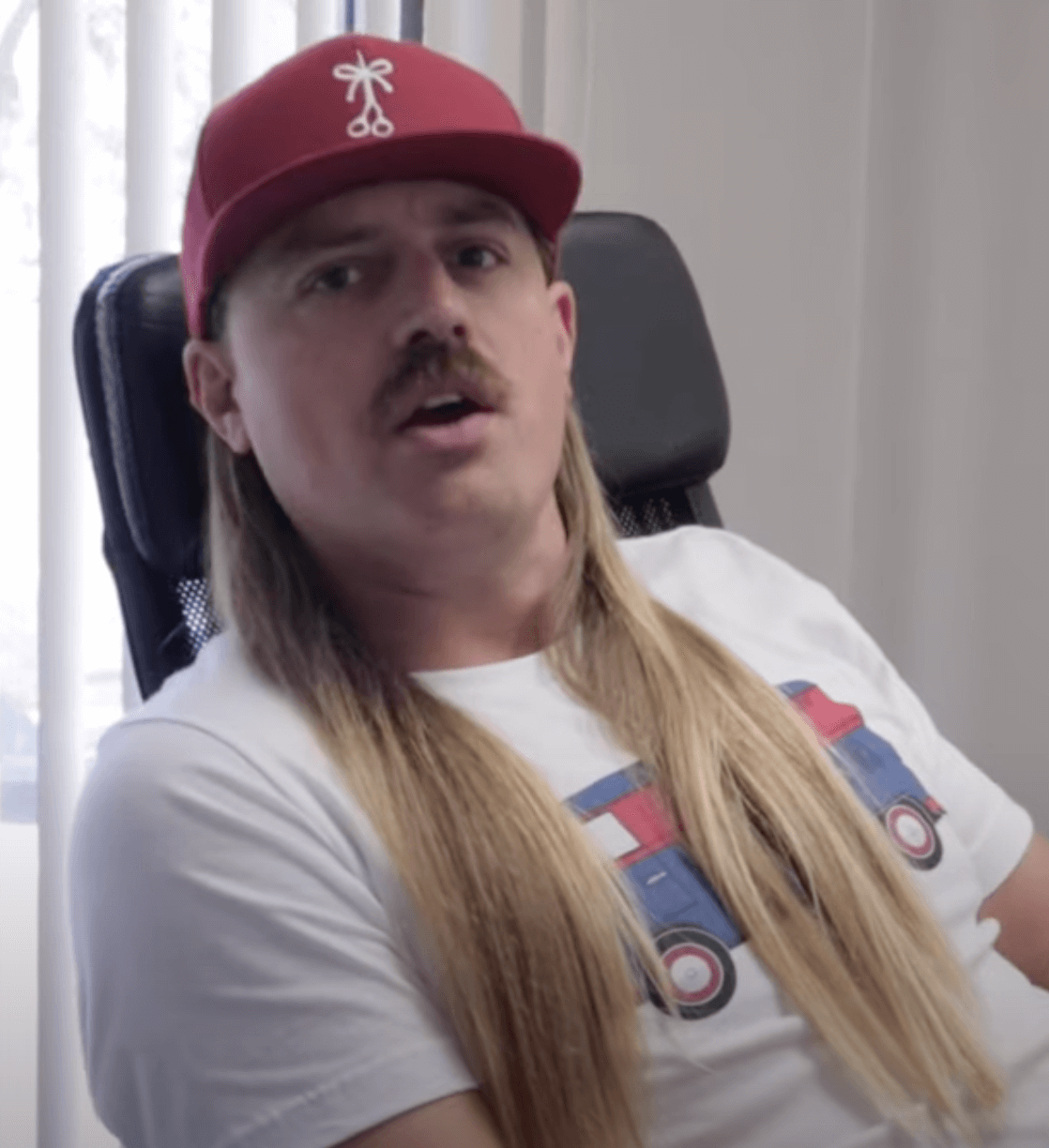 Getting Hired At The Longhairs

At the end of the week I was approached by El Rubio and he put it to me plain and simple: “hey, do you want a job?”

I honestly hadn’t expected that. I just thought I was hanging out with my new bros, and suddenly I had an opportunity to be a permanent part of this group.

After leaving the security contracting industry and taking a break from college, I was feeling pretty disconnected. I firmly believe men are pack animals and we thrive when we’re surrounded by others that prop us up. It was obvious The Longhairs were now my tribe.

Being A Team Player

I’m grateful for my time here so far. I haven’t had a single day where I dread going to work. It’s been like a dream to be a part of a group of guys that want to put something good into the world.

El Moreno and El Rubio are as much my friends as they are my mentors. It’s a privilege to be counted on, to be dependable and for people to want you on their team. This business is run by two guys that choose not to have an ego.

El Moreno and El Rubio are constantly innovating and they’re willing to make changes to their own brand if it means providing a better experience for the community. They are willing to go against the grain in order to provide a space for guys like us—even when they catch flak from people that don’t understand what The Longhairs is all about.

You may have seen I was one of four guys at The Longhairs who made my membership permanent. When asked if I wanted to do it, I didn’t hesitate.

Marking my body forever with the bound shears is a statement to others, but more importantly to myself: my hair isn’t just hair. It’s a reminder to love myself first and that I don’t need to look a certain way to be “manly.”

Everyone grows their hair for their own reasons. It doesn’t have to be profound. Sometimes guys have long hair because they want to be hella sick. Good enough for me.

If you’re a longhair, then you’re one of us. This is your tribe. Your hair is not “unprofessional,” or any of the nonsensical criticisms we’re subjected to. Your hair is part of you, and nobody gets to decide what to do with it but you.

If you’ve been with us for some time, keep holding the line. If you’ve joined us recently, keep growing. If you’re thinking about starting your long hair journey, join us, we’re here for you.

I never expected I would go from a customer to getting hired at The Longhairs, but life has a way of dropping opportunities in our lap. I love this community and what it represents, I’m happy to be here, and I’m going to continue to LET IT RIDE! 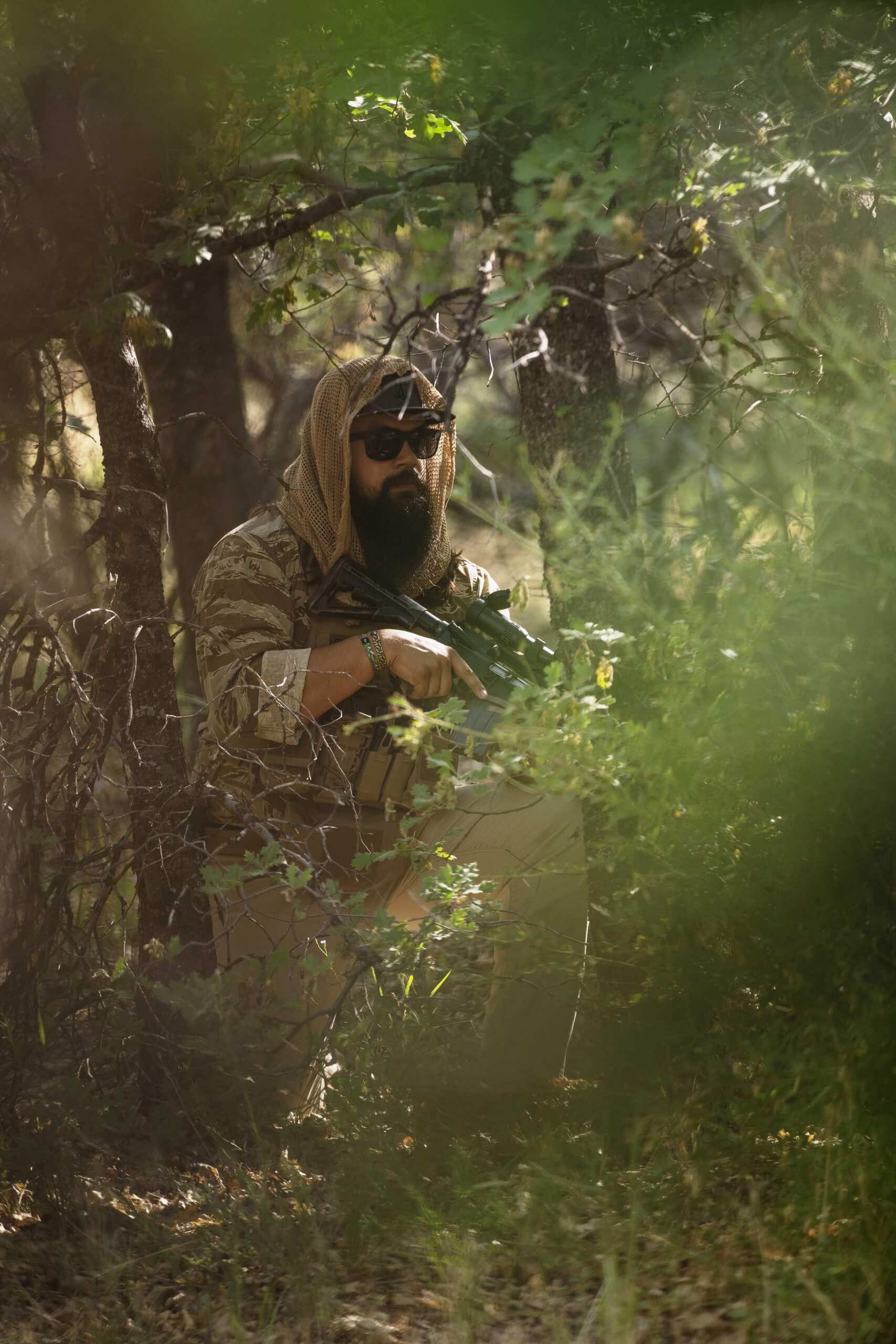 Born and raised in San Diego, El Sicario is a former Reconnaissance Marine and private security contractor, now saving bros from the treacherous grasp of inferior hair ties. In touch with his Chamorro heritage, he’s an avid supporter of mental health awareness.

El Sicario is co-founder of This American Blood, a veteran-owned clothing company redefining patriotic apparel. For love of country, when you’re proud without needing to be loud.