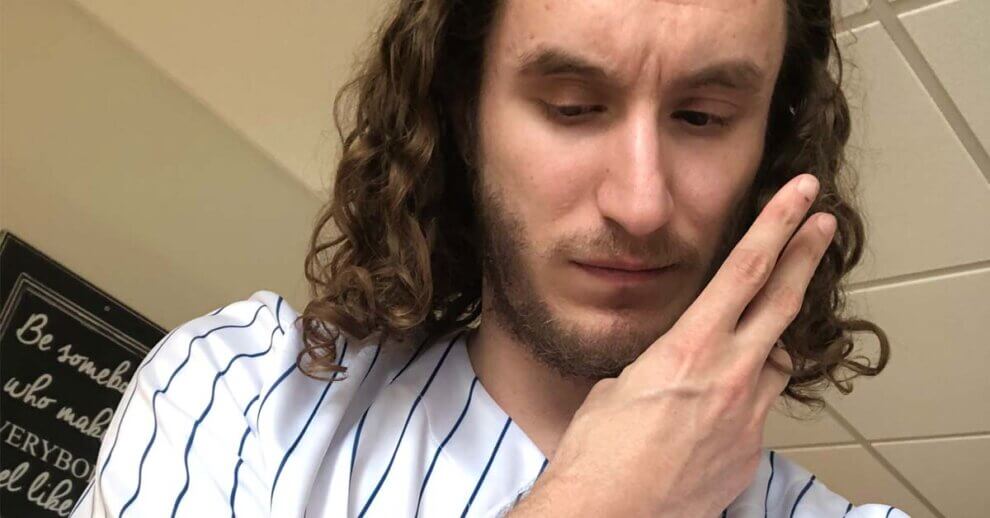 I am blind with long hair. Born at 26 weeks, weighing one pound, 14 ounces, I was different before I was conscious, spending my first days and weeks developing within the confines of a tiny oxygenated incubator. I found out later that box simultaneously took away my vision and gave me life, a balancing act that formed who I would become.

Early on I began missing developmental milestones, indicating there might be something wrong with my eyes. Many appointments and surgeries later I was declared legally blind, destined to learn about the world in a unique way.

No Control Over Being Blind

I was very lucky in school, having access to a high level of developmental expertise. I learned to use a white cane and read braille from the age of four, where many visually impaired children don't have such access.

I'm grateful for the opportunities I had to learn and to grow, but some of it came at a cost.

For example, I was often pulled from class during elementary and middle school in order to receive specialized instruction, which took a toll on my social standing. I had friends, and I wasn’t bullied incessantly, but there was no doubting I was different. Even in elementary school I could tell there was a divide between myself and my peers—for something I had no control over.

I couldn't help that I needed to walk with a stick or read with my fingers instead of my eyes, but these things set me apart. Looking back, I can see that now. 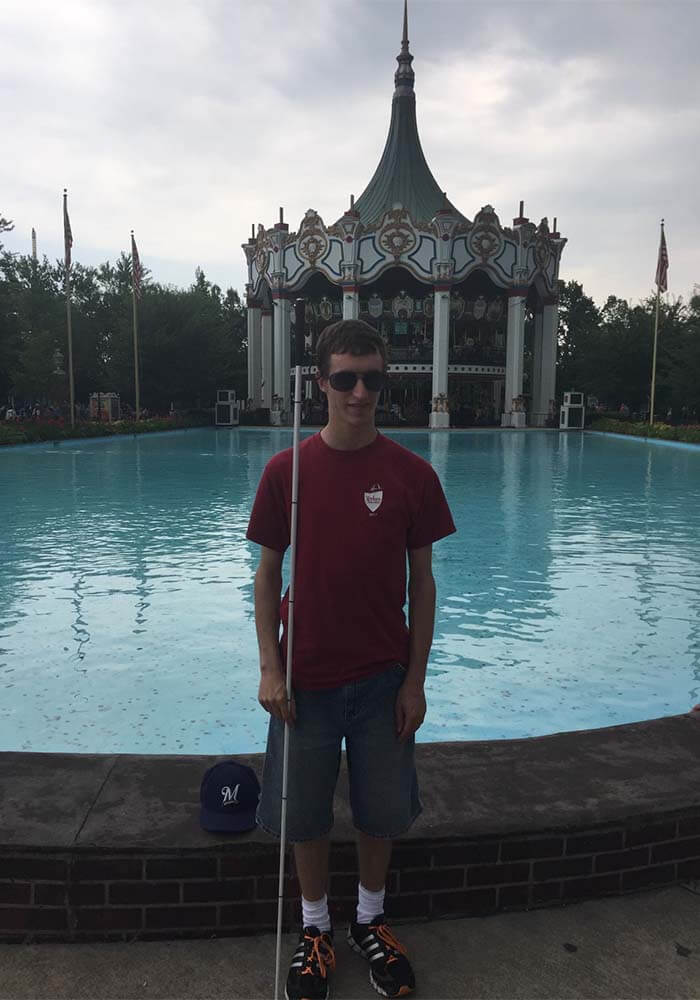 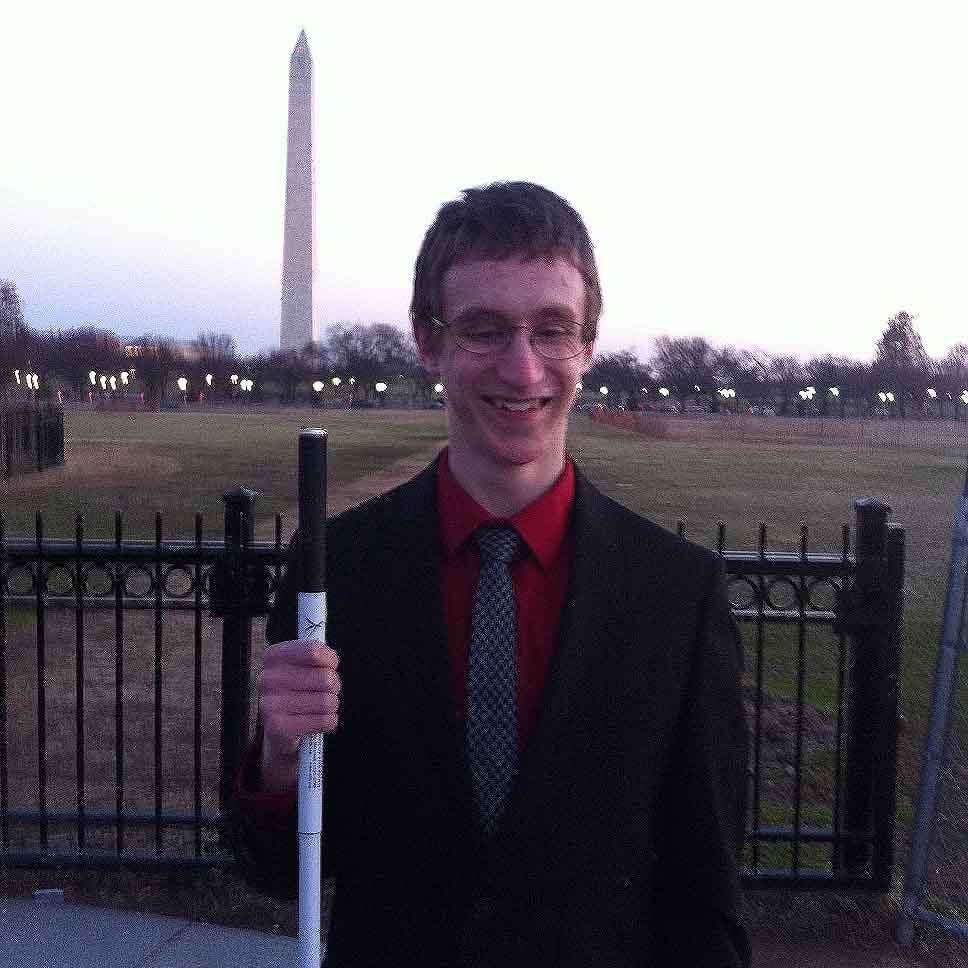 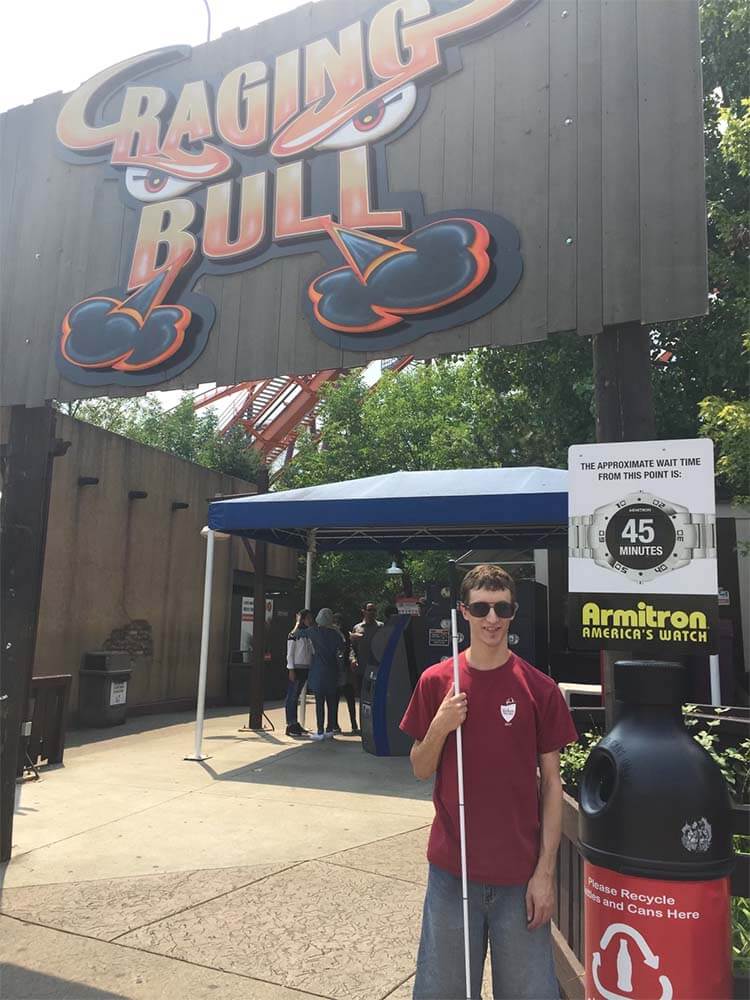 A Will To Be Normal

I attended a wide variety of summer camps with other blind children throughout my childhood. That’s where I found the first group of my people.

In those formative years, those people were like me in that they had little or no vision. They could understand the struggles of being a kid and being different.

When I told them about running out into the gym or refusing to leave class early, they understood why (even if none of us really knew it at the time). We joked about our travel instructors and braille teachers, relating to the things we all experienced as a community.

We could joke about things no other kids would understand. We bonded over things no sighted students could. It is with extraordinary fondness that I look back on long summer nights spent relating to people that truly understood things about me.

As I grew, I began taking these frustrations out on those who were meant to help me. First it was a staff member who served as my “visual aid.” She would adapt my homework into braille, find books and resources I needed, and facilitate getting to and from classes each day.

At school I struggled with organization and navigating crowded hallways. As such, she wanted me to leave class a few minutes early, so I could put things in my backpack and make sure I had everything.

I would often drag my feet, but still make it out a minute or two before the bell. One day, in fourth grade, I just sat there and refused to talk or move or do anything until the bell rang. Then I got up with everyone else, getting shuffled around in the hallway and probably forgetting what I needed.

Another example came in physical education. Having a visual impairment, I was supposed to play around the outside of the gymnasium, and I had a specialized teacher to help ensure my safety. I was terrible to the poor woman, running out in the middle of crowded dodgeball games and darting into high traffic areas.

Behaviors like these came from a will to be normal, and to do the same things as everyone else. I just wanted to be a part of a group…a group that recognized me as normal.

While the visually impaired community provided a connection, I gradually disconnected from my family as a teenager. Taking specialized classes in assistive technology, travel, and braille alongside my traditional academics, there was little real understanding or connection about me growing up as a person.

I stayed at the school from Sunday to Friday, and when I would come home there was always some reason I wasn't good enough, despite competing in sports and getting good grades.

Once again it was with people who understood and related to me that I became connected. Some were students, others were staff. A new family was formed, not of blood relatives, but of truly connected people, most of whom I am still in touch with to this day.

It was not from my parents, but from staff that I received the help I needed to put myself together enough to throw myself into college.

With no financial help, I got a job on campus and began working my way toward becoming a new person, this time more independently than before. It was here that my hair journey truly began. 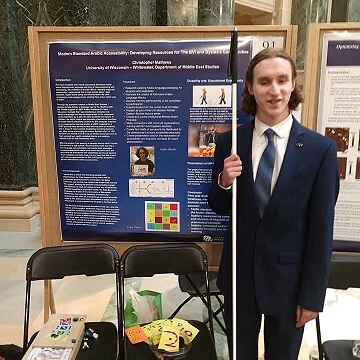 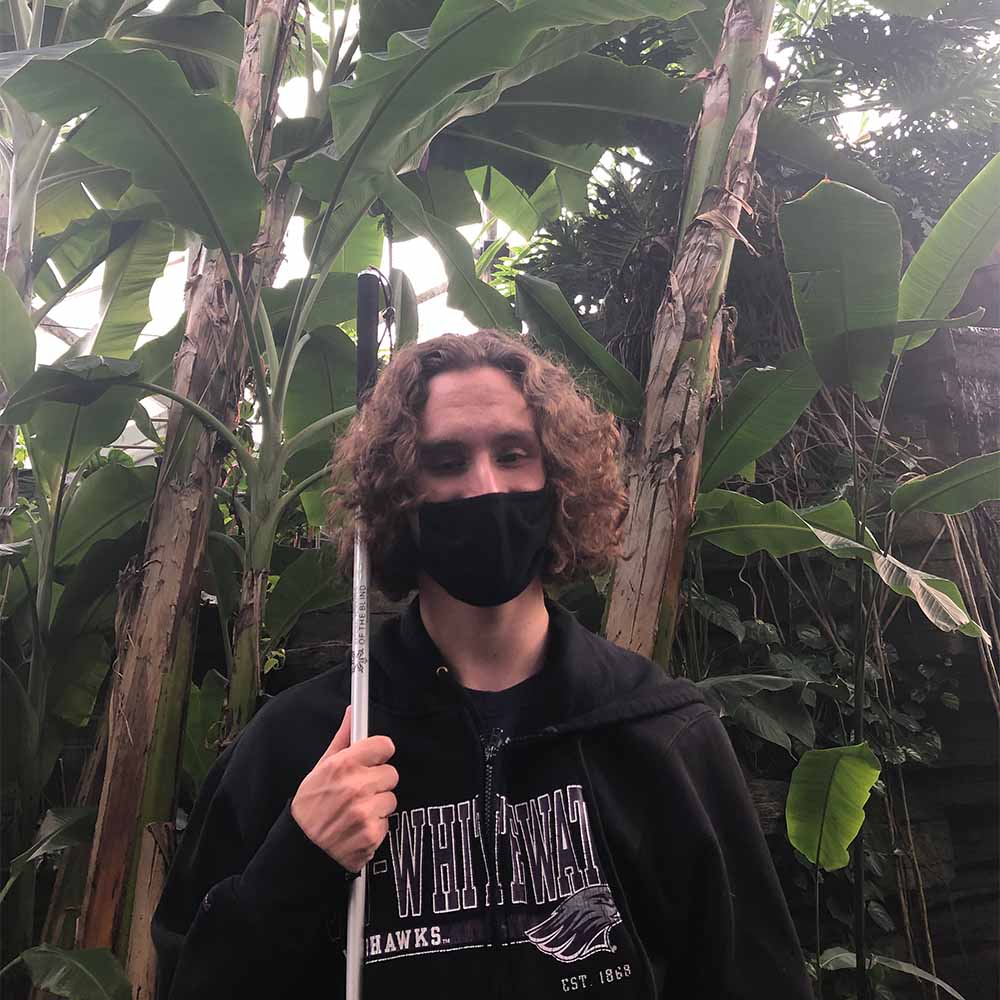 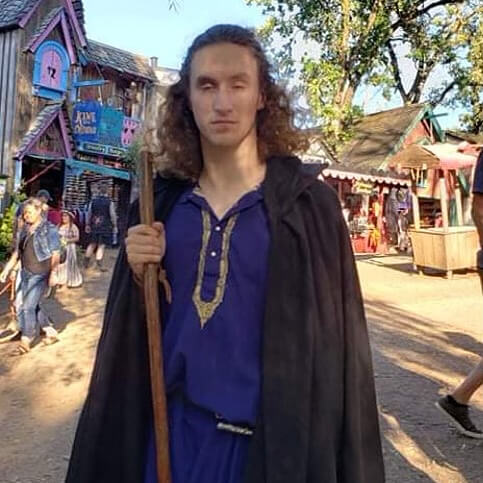 Jumping Into My Journey to Long Hair

During my second year of college, after a really rough breakup, I felt mixed up, out of control, and I needed to start over. I found myself watching videos of people falling from great heights, despite an intense fear of the sensation of freefalling.

Rather spontaneously, I decided I wanted to go skydiving. Everything in my life felt so out of control, I figured what the hell, so I jumped out of an airplane.

Just before the jump, I got my last haircut, joking that I wanted to be more aerodynamic. I didn’t know at the time it would be my last, that I would grow out my hair. But something happened during that intense, out-of-control freefall. I felt different afterward, like it somehow just snapped me into being…me.

Like in elementary school, I felt a desire to be part of a group that understood me. Soon I found The Longhairs, and I knew I was in the right place. This community, this group of people, those of us who call ourselves Longhairs with a capital L, understand things no one else does.

Being a blind member of the community comes with its obstacles. The awkward stage was annoying of course, but long hair is also very connected to visual concepts and ideas. When I have questions about style, how something looks or what message it sends, or I just want a description of a meme, there's someone who can answer my question.

Not just one person, but hundreds of Longhairs with different perspectives and life stories, all with something to offer. That's what I value in this community.

Taking Control As a Blind Man with Long Hair

Growing out my hair gave me control. It was something I chose, and continue to choose every day. I’m still different, but now I am different by choice.

As a kid, there was a definitive line between people who could see and people who couldn’t. These days, there are dividing lines for just about anything and everything. But I know within this community, we all have one thing in common. It’s that waterfall under the baseball cap, under the motorcycle helmet, under the bandana or just letting it ride.

It’s more than a slogan. It's about being yourself. I have found a group I will always be a part of if I have anything to say about it. Now I have the confidence to say…that I do have something to say. 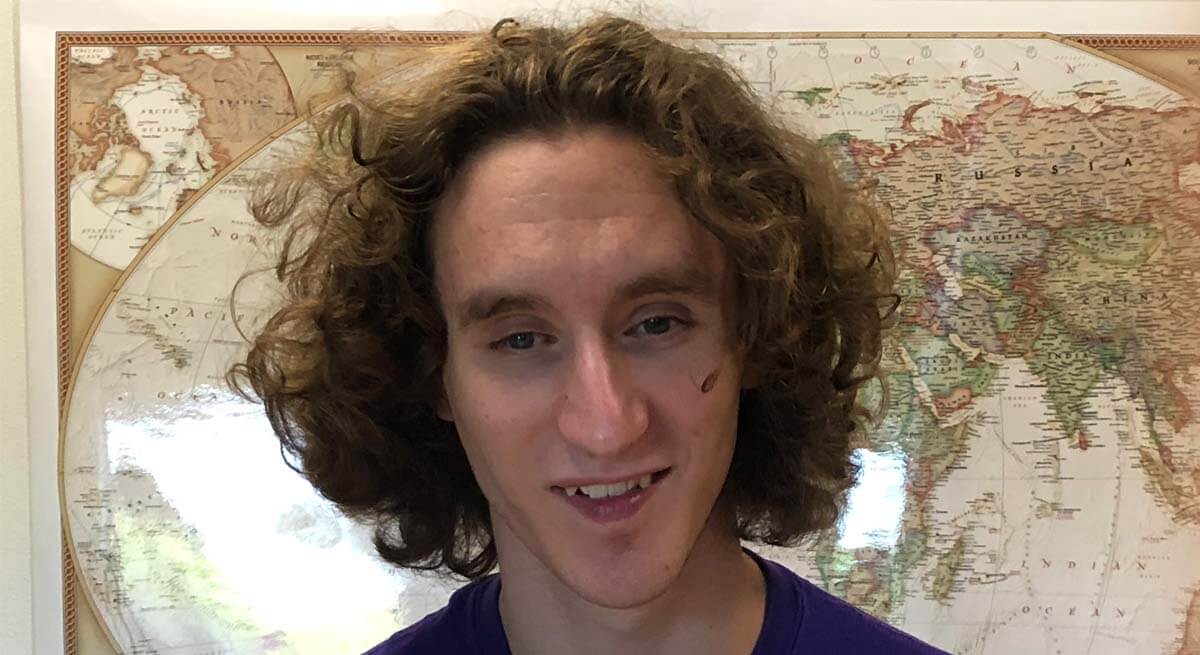 Chris Mathews is a longtime member of The Longhairs community, proudly representing visually impaired longhairs everywhere. Connect with El Ciego on the Serious Hair Guys Facebook Group and subscribe to his YouTube channel, Blind Over Matter. 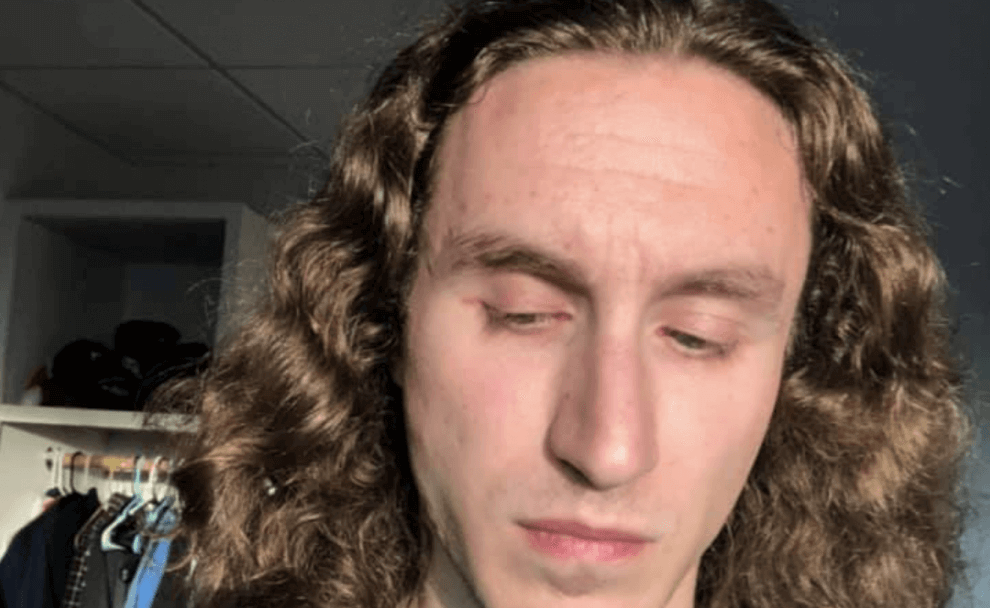