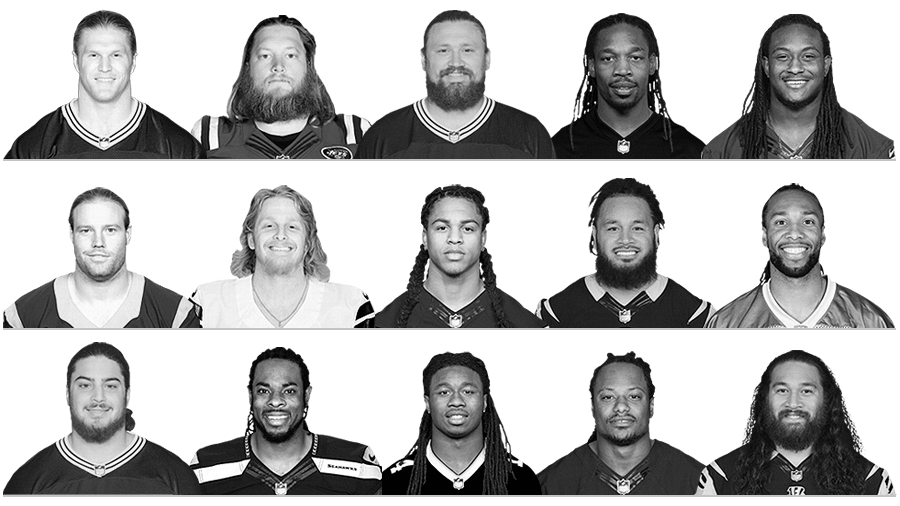 NFL kickoff. When everyone’s team has a shot at the Super Bowl; when hopes and spirits are high; when productive Sundays are abandoned for seven consecutive hours of commercial-free, non-stop, whip-around coverage on the RedZone channel, interrupted only for intermittent sprints to the bathroom and 90 seconds to heat up a pair of Hot Pockets, capped off with a dramatic compilation of every single touchdown of the day, wrapping up just in time for a 30-minute break before Sunday Night Football kickoff between two teams you don’t care about, but you’re going to spend an additional three hours watching anyway.

It’s a glorious time of year, almost as glorious as the flowing manes featured prominently here in the Fine 15.

It should be said now: neither Troy Polamalu nor Clay Matthews are #1 on this list. Quickly realizing there have been hundreds of longhairs in the NFL, we had to keep this list to active players, thus Troy, arguably the longhair godfather of the NFL, is conspicuously missing.

As for Clay…well, you’ll just have to see for yourself.

Whether you spend an unjustifiable amount of time watching football, or you can’t stand the NFL, we can all appreciate these fine locks on display on the gridiron each Sunday.

While he didn’t quite crack the Fine 15, we had to give the Chargers 2nd year defensive back a nod for his consistently exquisite locks and variety of presentation. Keep working and you’ll be a top 10 someday kid.
View image | gettyimages.com

The Bills’ standout wide receiver turned heads his rookie season with his breakaway speed, big-play ability and long braids cascading down his shoulder pads. We can only assume the braids elevated his draft status to a top-five selection.
View image | gettyimages.com

Not a lot of running backs on this list, you can imagine why if getting dragged down by your hair from a full sprint doesn’t sound appealing. Nonetheless another 2nd year standout has refused to part ways with his locks, earning him a #14 ranking in the Fine 15.
View image | gettyimages.com

There’s something about a man sprinting with golden hair streaming behind him. The 4th year Cowboy receiver’s hair is the color of hay, and he can take a hit.
View image | gettyimages.com

If you were still searching for a reason to like Richard Sherman, look no further. Lot of shit talking, solid defensive play…great hair.
View image | gettyimages.com

Coming in at a combined 12 feet, seven inches and 628 lbs., these offensive linemen and their formidable flowing manes provide a virtual blanket of protection for Aaron Rodgers.
View image | gettyimages.com

Oft-compared to another certain longhaired linebacker, the now-Falcons defender has been rocking long hair since his college days, cracking the top 10 for his longevity in the hair game as far back as Google images goes.
View image | gettyimages.com

The 10th-year pro and longtime Bear turned Buc has been lighting up receivers and women’s hair care aisles since breaking into the league back in ‘06.
View image | gettyimages.com

If you’re not as familiar with this name it’s because for the last 13 years this veteran wideout has had his name plate eclipsed with a waterfall of braids streaming down his back.
View image | gettyimages.com

This shit is getting serious. For whatever reason USC seems to breed longhaired defensive players, and this Bengal is among the most recognizable longhairs in the NFL. You’re an animal Rey.
View image | gettyimages.com

This guy’s stat line just says “C.” 10 years in the trenches getting his hair pulled and ripped out hasn’t caused the New York Jets O-line captain to blink an eye, just step on people when they talk shit about his hair.
View image | gettyimages.com

Reeling in bombs for 10 years, the Falcon wideout’s hair game has been on point since being selected in the first round of the ‘05 draft, going into his 11th season he’s still twisted up.
View image | gettyimages.com

Longtime Cardinal veteran and one of the great wide receivers, Larry is famous for his 89 TD’s and disciplined hair care regimen, augmented with a complete salon at his home, including black leather pump chair and a ‘cone-of-silence’ hair dryer. A true professional.
View image | gettyimages.com

Holy shit. This defensive tackle makes a full-grown lion look like he’s in the awkward stage. Few NFL players past or present have managed to showcase the sheer volume of manly hair this vets put on the field each and every Sunday.
View image | gettyimages.com

The retirement of NFL longhair great Troy Polamalu has made way for Clay as the most recognizable active longhair player in the NFL. And it’s no surprise, as women across the nation only dream of having locks as luscious as these, not to mention that highball game.
View image | gettyimages.com

#1 And finally, the #1 longhair in the NFL…Rob Ryan (Saints)

Players have been rocking the locks for decades, but longhair coaches in the NFL are hard to come by. In fact there’s speculation ‘ole Robbie may have even been passed over for a head coaching position, despite his performance as a defensive coordinator, due to his lengthy flow. As you can imagine, we’re not down for that.

For his leadership, gallantry, and not giving a f***, Rob Ryan, Certified Longhair, comes in at the #1 position in the Fine 15 Top Longhairs in the NFL. 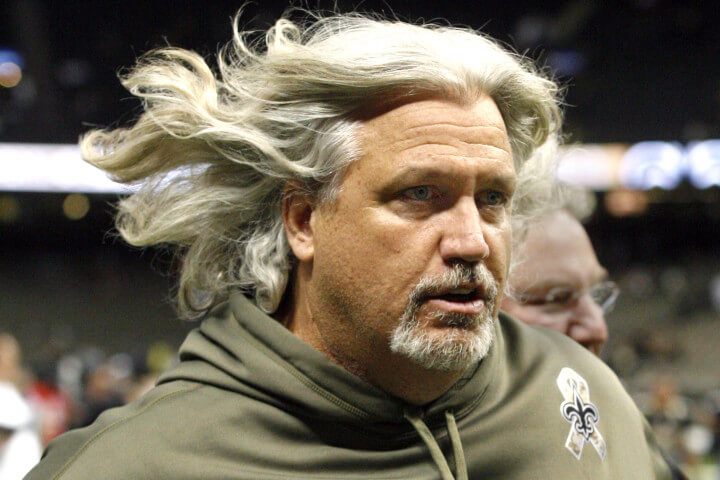