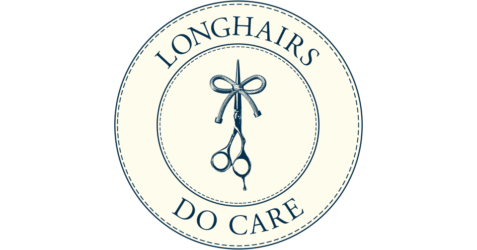 And The Great Cut

With our November check, The Longhairs have now donated $1,030 through our charity outreach, “Longhairs Do Care,” where we donate $1 from every sale to support folks who cannot grow hair.

This milestone means we’ve exceeded 1,000 orders—which means if you’ve ever purchased anything from The Longhairs, part of this contribution has come from you.

But we’re not the only ones donating. We have heard from hundreds of men and boys who grow, cut, and donate their hair to charity. Here are just a few comments from the longhair community:

Donating Our Hair to Charity

Hey guys that’s epic! I’m really happy to say that I’ve done this once and am currently working on my second 10 inches for them. And also that it’s awesome that y’all are partners with such a great organization like LoL. Keep up the good fight!
James from Tennessee

You guys rock!! Any and every long hair I meet I tell them about your page and give referral cards. I’ll see how many of my buds I can get to post progress pics and I’ll send one tonight. I plan to donate some of my mane in the spring, but not enough to be a short hair again, will let it ride again after the donation as well.Cale

Always shaved head, decided to grow it out to donate. I’m on 4 years growth! Want to grow it a bit longer so I’m not back to the awkward stage when 10-12 inches go. Stoked to see how far your dreams have come; let it ride!
David

Have donated my hair once and doing so had to go through that awkward phase twice! Smartened up this time and decided to go 4 yrs instead of two. Truly awesome site and will gladly be handing those cards out!James

While some Longhairs may not mind having their hair fried, blown-out, extensions, permed, etc., know what you want, I for one do not want color or heat near my hair as I donate my lusciousness to an organization to help women and children who want wigs.
Equus

I donated 11 inches of hair just about 3 months ago. The first picture is before I cut my hair, the second is after I cut 11 inches off, and the third is 3 months of growth. Super cool post idea, looking forward to seeing everyone’s hair updates!Chris

Started 2 years ago when I was 80. Always had a Flat Top, now I can donate it when the time comes.Andy

I was planning to donate, but I can wait till you guys plan a big event if it is really going to happen.Cesar

It’s one thing to donate money, these guys have donated their hard-earned locks. Money can be earned overnight; long hair can only be earned with time.

Way to go guys. We are damn proud to have you as part of this community.

SO HERE’S WHAT WE’RE GONNA DO

We are announcing the largest gathering of men with long hair in the history of mankind, or at least since Braveheart, for the purpose of cutting and donating our hair to charity. Together.

More About The Great Cut

It will be The Great Cut

Truthfully, I’m a little terrified putting a finite countdown on when I’ll part ways with my locks. I have nightmares when I wake up and my hair has been cut, much less doing it intentionally. After almost five years of growing, it’s not something that brings a warm and fuzzy feeling.

On the other hand, there’s a certain confidence that comes with my commitment to keep growing for at least that long. I’m also comforted thinking, I don’t have to cut it all off. Shoot by that time I can probably give 12” and still be mid-areola. It also means The Longhairs will have to stick around at least that much longer, a heartwarming notion.

Here’s what really matters: to a little girl who might not make it much longer, and whose hair and identity has been robbed by whatever affliction she’s facing, my hair will mean more to her than it does to me. When you think of it that way, it makes sense they would call it Locks of Love.

We’re talking about a monumental occasion. Thousands of longhairs gathered. And if you think we’re not going to take advantage by throwing an epic bash, just wait until you witness a tsunami of 1,000+ simultaneous hair whips. Chuck will appreciate that for #HairWhipWednesday

Furthermore, this post gives every man and boy a perfect and legitimate reason to grow his hair out. Any spouse, parent or employer who has something to say about your long hair, all you have to do is point to this post and tell them, we’re growing it out for a purpose: for donating our hair to charity.

So here it is, the date is set:

And the countdown is on.

As most people’s hair grows a half-inch per month, 24 months from now means 12” of growth between now and then. And since Locks of Love has a minimum donation length of 10”, most guys can start right now and be ready come game time.

Not only do we accept the challenge, but we charge you with the task of spreading the word and recruiting our fellow brethren to the cause. Every man in the world can accept this challenge, today, with purpose and conviction.

Which brings us to the final question: will you join us for The Great Cut?

More About The Great Cut