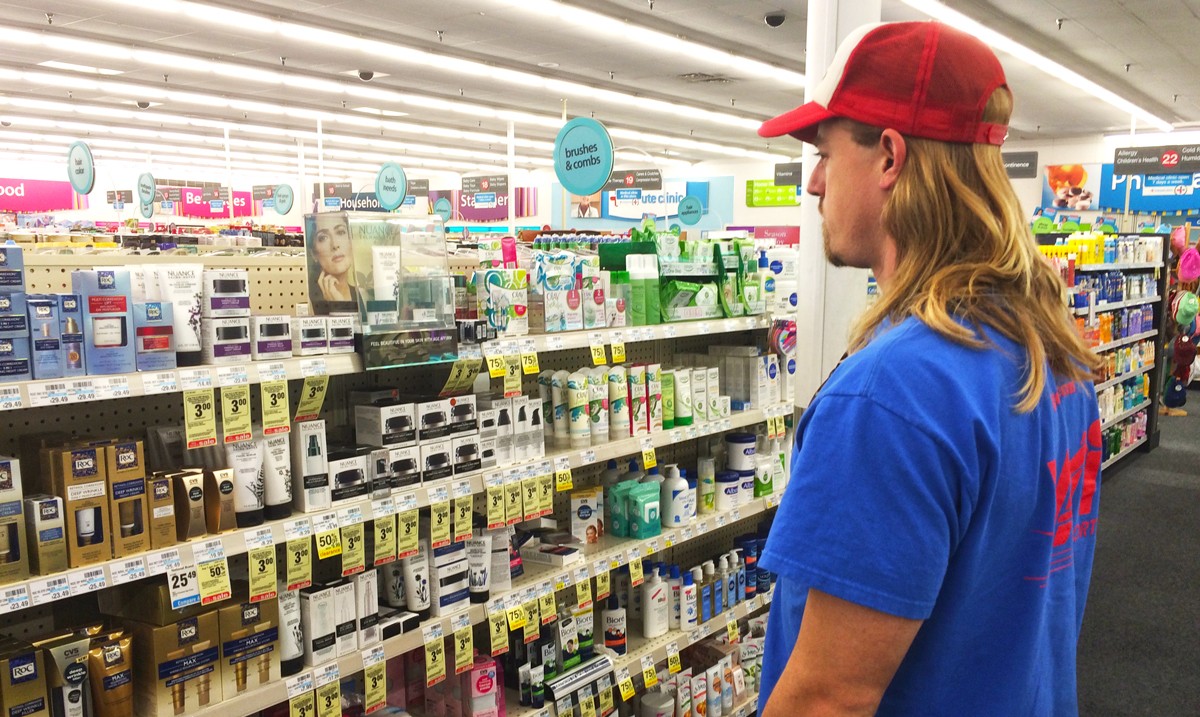 Chances are you know at least one man or boy with long hair. He might be a family member, boyfriend or husband, a casual acquaintance, or just a Facebook friend you don’t remember ever meeting. It could be someone you’ve known for years who always had short hair, but recently made the life decision to grow it out.

You probably haven’t thought much about this guy’s long hair, or his struggle. That’s because there are things you simply don’t think about unless you are a man with long hair.

For example, you may not have noticed that period of three or four months when he was in the awkward stage. It was a lonely time. He had little support, if any at all.

He wondered, are ponytails acceptable? How do I tie it properly? Where did I get this hair tie, and why is it pink?

His friends, stalwart supporters and confidants, abandoned him for neater, tidier-looking gentlemen who would serve as better wingmen at the local tavern. Likewise, his girlfriend at the time wasn’t down for the poor, raggedy looking mop on his head, and she left him. Even his dear mother, his #1 supporter in life, ever-so-gently suggested, “maybe you should just cut it, honey.”

It was lonely indeed. Which is why most men never make it through this awkward stage, and frankly we can’t blame them.

But this acquaintance of yours, he made it through. He stayed the path, committed to a brighter future, finally reaching his shoulders and the universal longhair benchmark of being able to tie it up. It was a big moment for him.

Even then, he was introduced to new struggles.

Questions presented themselves, with few answers. He wondered, are ponytails acceptable? How do I tie it properly? Where did I get this hair tie, and why is it pink?

He thought to himself, should I brush my hair? If so, how do I perform such a task? He figured he would find answers at the drugstore, but instead he found more questions, and worse yet intimidation, embarrassment, even shame.

He stood stoically in the women’s hair care aisle, nervously, as women paraded past him in pairs. Moms and daughters, friends and sorority sisters, all seemingly clear on their task at hand, finding immediately the products they desired and dispersing quickly.

He concealed these products in his shopping basket with men’s shaving products, a home-gym set of perfect push-ups and a can of motor oil.

They didn’t seem to notice him, and yet he felt ever-more conspicuous examining bottle after bottle of lilac-scented shampoos, conditioners and other mysterious formulas. He ultimately made his selection after much debate and reading of labels promoting volume and shine, the least feminine in appearance and scent, yet still decorated with colorful pastels and cursive typefaces.

Walking to the checkout aisle he concealed these products in his shopping basket with men’s shaving products, a home-gym set of perfect push-ups and a can of motor oil. He chose the register attended by the kindest-looking female clerk, least likely to question his selection, even though it was the longest line.

Other inconveniences surfaced. Like hair in the sink, and the shower drain, and most every other place. His sunglasses, in year’s past an object of comfort, now painfully latched onto individual strands of hair causing him great grief, fear, and frustration.

More than once while dining with a lady he’s been approached from the rear and greeted by a server, “hello ladies.” He’s been teased, jeered, possibly even threatened by strangers, friends, maybe even his father. He’s even been cat-called by groups of obnoxious men loitering on the street corner, who, reeling, quickly pretended they were joking amongst themselves upon realizing they were whistling at a man.

Furthermore, when he approached the employment market he found his vocational opportunities far more limited than in previous experiences. Several positions were ruled out immediately, still others after closer inspection of company policies. The one interview he was granted ended abruptly after HR officials tactfully asked if he’d read the men’s personal grooming standards manual.

Finally, there is a place for every man with long hair to go.

Through all this, he’s kept his composure, and he’s kept letting it ride. Why? Maybe his reason is like this guy’s. Or these guys’. Or maybe he’s just refused to give in. Whatever the reason, he’s still got his locks, and he’s damn proud of them.

So give that guy with long hair a little credit. He’s been through a lot in his longhair life.

That’s why The Longhairs are here: to advocate for men with long hair. To offer hair knowledge, and education. To provide answers to questions. And to celebrate these long flowing manes, with longhair meetups, tales of heroism, and #HairWhipWednesdays.

Finally, there is a place for every man with long hair to go. And your friend deserves to know about it.

Whether he’s an acquaintance, a neighbor, your boyfriend or business partner, don’t let him go any longer without a community.

Kindly, mercifully, tell this upstanding gentleman about The Longhairs. Text him the link. Tag him on your social channels. Or request your pack of Longhairs referral cards below, and present one to him in person, ceremoniously.

However you do it, don’t let that man with long hair go any longer without the community he deserves to know about. He’s made it this far. He’s been through enough.

Tell him The Longhairs are here.

Not sure how to hand them out? Order your cards and our proven referral process will be revealed to you.