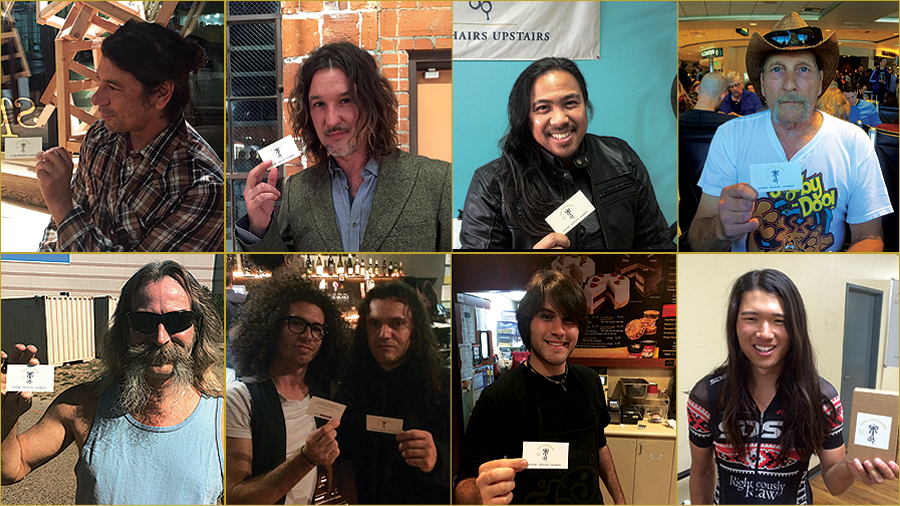 We’ve met more men with long hair in the past three months than in both of our lifetimes combined. Since Long Manes & Candy Canes we’ve been handing out referral cards to every longhair we see.

We started with a box of 2000. Now we’re down to 50, meaning there are 1950 longhairs referral cards out there in the world. Hopefully they’ve fallen into the right hands.

We’ve met longhairs from nine years old to 70+, and the reaction we get is great. Nine out of 10 longhairs are stoked to get a referral card. It usually goes like this: quick glance, interest, closer inspection, recognition, “The Longhairs…”, slow head-nod, flip to back of card, resounding head nod, look up, expression of approval, but what IS this??!

This sequence unfolds, and almost every guy is pumped. Here are some candid responses from real-life longhairs:

“This is the greatest thing I have ever seen.”

“This is what I’ve been waiting for.”

“Do you guys have a secret handshake?”

What Does This Mean?

It’s great to see a positive response. Guys with long hair are seriously down for long hair.

But there are thousands of longhairs out there still calling their highball a manbun. They’re in longhair hotbed zones like Portland, Seattle, Denver, Santa Cruz, Bozeman, Jackson Hole, Lake Tahoe, Boulder, Austin, Nashville and Albuquerque. That’s not to mention our international brethren, or solitary longhairs residing in shorthair territories.

We aim to reach them. Because every longhair should have a place to celebrate Hair Whip Wednesday.

So raise a glass boys, and keep lettin it ride.